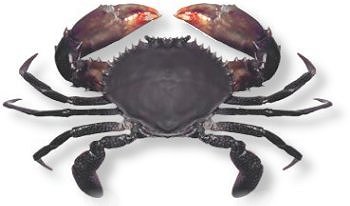 Distribution - Mud Crab inhabit tropical to warm temperate waters from Exmouth in Western Australia up and along the coastline of the Northern Territory and Queensland to the Bega River in southern New South Wales. They favour soft muddy bottoms below the low tide level and generally live in sheltered estuaries, mud flats, mangrove forests and the tidal reaches of some rivers.

Characteristics - Mud Crab are a member of the family Portunidae. They are large crabs with a smooth, broad carapace and possess sizeable claws used for crushing and cutting prey. The two hind legs are flattened for swimming. Mud Crab are generally very dark brown to mottled green in colour. Juvenile's feed on planktonic animals, benthic molluscs and crustaceans while adults feed on bivalve and gastropod molluscs (mussels and pipis), small crabs and polychaete worms. 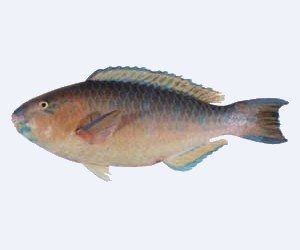 This beautifully coloured fish is red on top with a white band along the lateral line, a blue band below it and is creamy/white below.  Numerous blue and putple markings surround the head and eyes.  It has scales but its blunt body is slimy and difficult to hold.

It has white flesh and is very good to eat.

They are very common close to the NSW coast on reefs and are also found around the southern mainland coast of Australia.  They are usually about 30cm. They are bottom feeding fish and will take prawns, and fish for bait.

Size - Maximum of approximately60kg and a length of 1.8m.

Characteristics - Mulloway are mostly silver with a blue/grey, green, or bronze coloured back. They possess a line of silver/white spots that follow the lateral line and sometimes have a black mark at the pectoral fin base.

Confusing species - Teraglin. The end of the Mulloway's caudal fin is convex (rounded), whereas the caudal fin of Teraglin is concave.

Size - Sand whiting can reach a maximum length of around 47 centimetres.

Characteristics - Sand whiting are a member of the family Sillaginidae. They are silvery white in colour, with plain yellowish sides. Dark blotches are present at the base of the pectoral fins. In terms of shape, they are fairly elongate and only slightly compressed. The snout is relatively long and conical. Sand whiting feed on marine invertebrates, including crustaceans (yabbies, prawns and soldier crabs), polychaete worms and bivalve molluscs (pipis). Sand whiting use their conical snout to forage for benthic animals through sand and mud. This species is known to bury itself in soft sand and mud when alarmed.

Fishing Tips - Whiting are generally caught using rod-and-line and handlines from shore or by boat with live baits, such as worms, soldier crabs and yabbies (nippers). Fresh peeled prawns can also be used.