Distribution - The Northern Flathead (P. arenarius), sometimes known as the flag-tailed flathead, is endemic to Australian waters and is commonly found along beaches and in estuaries of Northern NSW. Its range extends through Queensland into the Northern Territory and as far south as Carnarvon in Western Australia. It has been recorded as far south as Jervis Bay on the east coast.

Size - The Northern Flathead is one of the smaller species of flathead, growing to a maximum length of 45cm (approx. 0.7kg).

Characteristics - The Northern Flathead has a pale brown body speckled with pinkish-red spots. The caudal fin (tail) is the best way to identify the northern sand flathead, with a pattern of almost horizontal flag-like black stripes across the tail (three distinct black bars on the upper portion and two on the lower portion of the caudal fin). Unlike many other flathead species, the northern sand flathead sporadically appears in schools.

Fishing Tips - Trolling or spinning with lures along sand flats or a sand gutter drop-off at the top of the run-out tide is a popular way of targeting most flathead species. These may also be caught drifting over sand flats. 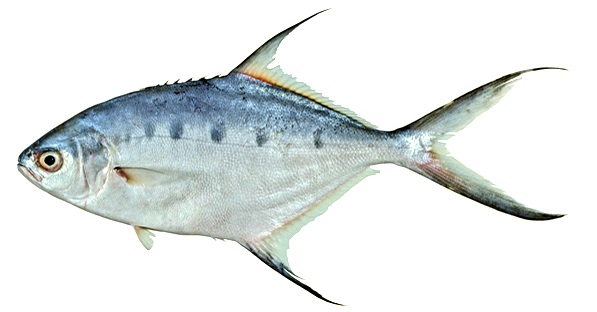 Size 200g - 3kg.
Habitat Swallowtail Dart are found along open surf beaches, headlands, sheltered offshore reefs, ocean reefs, coral cays, estuaries and lagoons in the sub-tropical waters of Australia. They prefer rock, coral and sandy bottoms and can congregate in large schools to feed under active surf, in white water, in surf gutters and holes as well as entering estuarine waters. The Swallowtail Dart can be found from Qld. to N.S.W. and sometimes further south.
Qualities Strong savage fighter with pure agility providing excellent sport on light tackle. Strikes hard at baits and swims away with speed. Once hooked the fish constantly changes direction darting and jinking from side to side.
Record Australian record 1.0kg.
Best Bait
bait: Bass Yabbies (nippers), Beach worm, Bonito, Crab, Fish flesh, Garfish, Pippi, Prawn, Slimy mackerel (blue), White bait, Yellowtail scad (yakka)
lure: Minnow, Popper
Tackle
Link: 3 - 7kg main line with a 50cm trace.
Hook: No.4 - 2/0 Mustad 92554 Beak or Longshank.
Rig: Light beach gear with a lightest running sinker.
Hints Fish move in to shallow ocean beaches on rising tide congregating in the deeper water of gutters and holes. Cast toward gutters and holes adjacent to broken water and move bait steadily encouraging strike. Fish the deep gutters along beaches when the tide is at its peak. Bite best on sunny days. Cast into the breakers. Dart often take bait as it hits the water so immediately take up slack in line after cast. Fish are attracted to moving baits. Place a few red beads on line directly above the hook as an attractor. If fish are seen to be surface feeding in large schools, usually in estuarine waters, try a small lure or feather.

Distribution: Generally found in the more northern waters of NSW but has been recorded as far south as Jervis Bay.

Size: Maximum length of 2m and a weight of approximately 65kg.

Characteristics: Cobia are best recognised by their very short spines of the first dorsal fin as well as distinctive pale and dark horizontal banding along the side of the fish. At first glance they appear shark-like and have a broad flattened head and slightly overlapping lower jaw. Juvenile cobia have a rounded tail whereas adults have a forked tail.

Confusing species: May be confused with some species of remora, however cobia lack the 'sucker' on the top of the head.

Distribution: A schooling tropical species that arrives off the NSW coast with the warmer currents, usually during summer. These fish generally prefer offshore conditions and can often be found around floating objects such as fish trap buoys, weed rafts or Fish Aggregation Devices.

Size: May attain a maximum size of approx. 200cm.

Characteristics: Colours of these fish vary from a silver/white to yellow/green with iridescent blue spots. These fish have a narrow body, a high head profile (particularly large in males) and a high dorsal fin that runs nearly the length of the fish. The eyes are located quite low on the head.